A bra that turns into a shopping bag

Taking off a bra into a supermarket to carry the groceries back home. What an epic scene would that be, don’t you agree? No sane person is ever going to do that but it does paint a good mental picture! All kidding aside, this bra is to raise environmental awareness. It was introduced by Triumph on November 2006. It’s equipped with padded cups that help convert the bra into a reusable shopping bag when removed. Neat! The bra itself is made of polyester fiber which has been recycled from plastic bottles through the company’s patented EcoCircle recycling system. Ιnterestingly, this is the only bra in the list that’s available to order! There’s a red, blue, green, yellow and pink version of it. Grab one of these and it’s guaranteed you’ll get the grocery store queue talking… about the environment!

Chopsticks go right into that bra!

Yeah, you can’t make this stuff up. This one comes with a small side pocket used to carry reusable chopsticks. Triumph claims this is yet another attempt to raise environmental awareness. Wait, whaaaaaat? How can a bra with a side pocket for chopsticks help the environment? The idea came up because most chopsticks are disposable and Japan suffers from a deforestation problem (partly) as a result of that, Triumph explains. Fair enough, Triumph. But why a bra to carry the reusable chopsticks? Purses do that too, you know.

A Bra To Support Rice Farming

And just about when you started thinking it couldn’t possibly get any weirder. So yeah, you can grow your own rice in a bra cup according to Triumph. This thing comes with gloves and all sorts of other goodies; a true rice farming kit! Guessing female Farmville fans would find this one appealing. The rest of women on this planet? Hard to tell, hard to tell…

Powered to do what, right? Why on earth would you install solar panels on a bra? Well, the purpose of this… bra(?) is no other than for it to act as a power source for small appliances like a toaster or as a charger for your mobile phone. And get this… it’s equipped with small pads designed to hold drinks inside so that you don’t have to use disposable plastic bottles or cans. Crazy.

A bra that turns into a golf course

Turns out Japanese women “dig” golfing. Yeah, we didn’t know that either. Triumph took advantage of that trend and presented the “Nice Cup In” bra. This one’s featuring a corset garment that serves as a 1.5 METER (!) putting mat when removed. And it gets better! The bra has a built-in speaker out of which comes the phrase: “Nice one” when you manage to sink a putt!

What could a man possibly want more than his girlfriend wearing a bra with a built-in countdown clock racing down to the day she wants to get married? The countdown only stops when that someone special places an engagement ring into the bra and then… the perfect closure. The bra’s speakers play the wedding march! 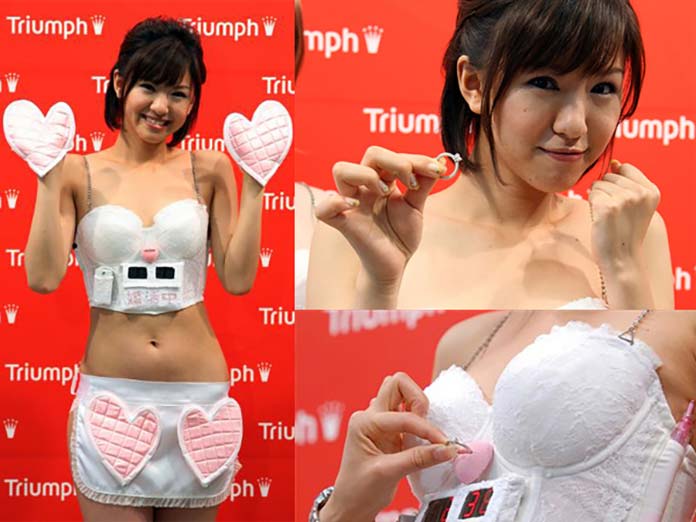