Who is that man over there? The one that just passed. No, don’t tell me you missed it. I’m certain it wasn’t Charlie Chaplin. But… Oh, heck! I’ll just go ahead and say it: I think I just saw Adolf Hitler. Even when you do see Hitler, at least in photographic representations, there is a lot that’s missing, that you don’t see in him. It is not just the mystery that surrounds him (of which there is nearly as much as with Elvis), but also the numerous strange things — dare I say — quirks that are known about him. I’m collecting the best of the best. Hesitantly, mind you; projects like this can be used to humanize tyrants and while I certainly agree that Hitler was human, these facts are not collected for that end. Instead, the list is working off a perverse interest in the unexpected. Much of what follows is extracted from A Concise Biography of Adolf Hitler by Thomas Fuchs.

He was a high school dropout

He was a high school dropout. Not only that, but he repeated his sixth year and was rejected twice from art school. This takes the phrase “Hitler’s stupid” to a very different place. While absolutely agreeing that the man’s coming into power and the entire regime is stupid (in that ridiculous, horribly absurd way), there was a genius to his craft of speech to make people believe not only the insane things he claimed, but also that they could be achieved. That craft? As an orator. The root of a dictator is shared with dictate: a speaking role, a performing role.

While having artistic ambitions, there are a lot of burgeoning movements that he simply couldn’t stand: cabaret, expressionism, and jazz music, for example. This contradiction can be accounted for by the ideological background of the artists that worked in each of the fields. Cabaret, for instance, was actively in political opposition to nazism and supported the free love of homosexuals, ineffectual citizens, and debauchery in general. Expressionism, like jazz, is not inherently political although the practitioners were in large part Jewish. Unlike jazz, the link to the artistic style and Jewish tradition is not apparent in expressionism (which doesn’t mean that Hitler’s hatred isn’t as well).

Times Magazine announced Hitler the Man of the Year

In 1938, Times Magazine announced Hitler the Man of the Year — although political correctness has corrected this to Person of the Year. Joseph Stalin got it the following year, and then again in 1942 (aside from Winston Churchill and George W. Bush, the only person to win twice). Sure enough, Time has made some silly choices for the award, such as Middle Americans, Baby Boomers, the computer, and — my personal favorite — You, but Hitler! This comes well after the publication of Mein Kampf and its translation into English. Oh well, this can serve as a warning. To be the Person of the Year, you must have power, political or otherwise. Hitler is a good example of what evils power can spawn.

Next time you’re told off for staying in bed until 11 o’clock, just tell the one complaining that you’ll be a world leader one day because Hitler often woke at this time. Really, he did. Suffering from insomnia, it was quite normal for him to be up, busying himself by pacing diagonally in his room, giving himself (medical) enemas, or some other peculiar habit of his. The reported regular bedtime for him was around four or five in the morning. This is surprising given the success of his missions, but not altogether useless as a leader, for it teaches people to live around you.

Hitler never took off his jacket in public 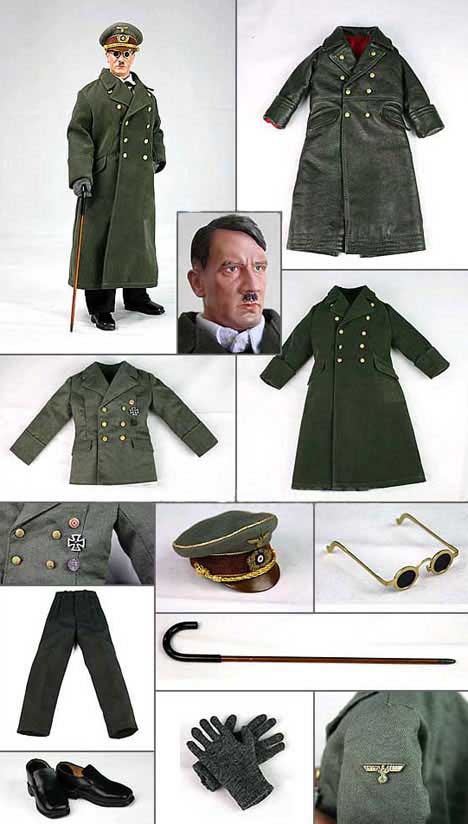 For an orator, personal appearance is very important. As a result, Hitler never took off his jacket in public (presumably afraid of sweat marks), always wore pre-tied neckties (heaven forbid it should be out of place!), only wore full-length underwear (not so easily explained), etc. And since we’re here, we might as well take a bash at his mustache: no one could convince him that it didn’t work with the get-up. One day, he deluded himself, it will catch on because everyone will want to be like the Führer. I personally think it suits Chaplin much better.