The humanoid caricatures on the left are the torturers, presumably Chinese. Why, in this story set in Europe, need there be Asian undertakers? Is gruesome torture all too unbearable for the sensitive Western sensibility? Take it to the Orient, for they can handle the suffering of others easily. Have them look ominous and alien (in both senses of the word), and not only that but turn their threat — made very present in the array of torture utensils on the walls and floor — into slapstick! What silly men, this scene asks its readers to think. This is thousands of yards away from the character depth Herge gives to Chang in The Blue Lotus, where he finally starts doing some research on the countries and peoples Tintin travels to.

How kind of Tintin to give the “Pygmies” the benefit of the doubt. No, not really. He hadn’t done that at all. He had emasculated them, treated them as idiots, and denied them their rights. Well, at least, he thinks he gave them the benefit of the doubt! Very easily, he reverts to judgment. So it is that the brave hero turns to face the violent other all on his own. This violent other is depicted as primitive to the core, with the stereotyped features that need no describing, their weaponry, and brutal insistence. Nothing positive can be extracted from this depiction.

This panel supports three typical colonial beliefs: that slavery is quite as natural as any hierarchical system, that non-Europeans never grow into the maturity of adulthood, and that they are more than a little slow although servile. No, no, and no – not that it needs saying any more. The Tintin of the early days never ceases to shock modern readers. This year, there has been a court case suggesting the banning of Tintin in the Congo permanently on account of its racism. The result: moving the album to the adult graphic novel section, sealing the content, and marking it with a warning label.

On top of everything else he had done to them, he leaves them as abandoned with an impression of his greatness as “all-powerful” — as the shrines to himself and Snowy in the top left-hand corner clearly illustrate.

Rumours spread that “in Belgium all whites like Tintin,” that is figures that would impress and overwhelm to the point of being worthy of worship. So the Congolese finally get to speak and this is what they say! Well, this and that they can keep his photo camera if he doesn’t return within a year and a day. This is all too firmly based within a paternalistic conception of colonialism. 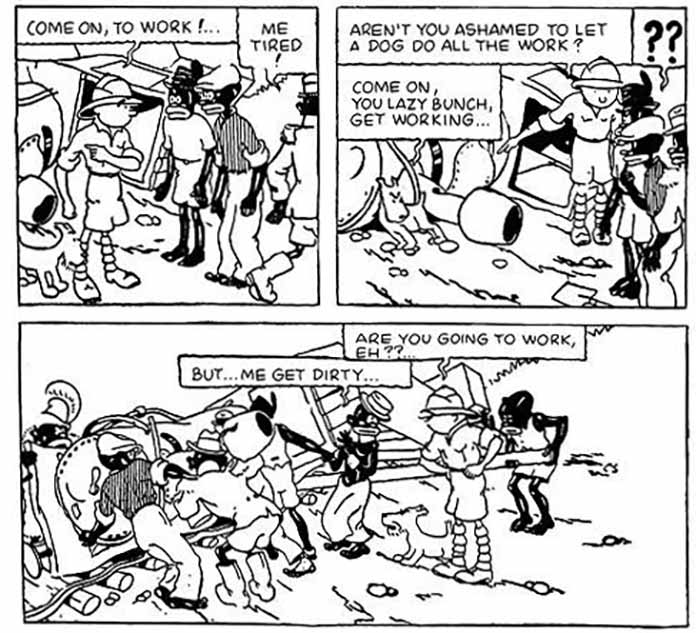 Not had enough stereotyping yet? What about this portrayal of nobel savages, incompetent and undignified in the Western get-up. On top of that, they’re a “lazy bunch” according to the persistently racist Snowy. The nobel savage is put in an awkward position: taught the ways of the gentry (which would not allow one to get one’s clothes dirty) with this conflicting request by the white man to help the dog. And what does the white man do in this situation. Ah, yes. Stands there scolding, hands on hips. He knows his place very well and expects the others to know theirs.

What do you think? Was Tintin early formations a tad racist at times? Would that be justifiable and in what way? Please let us know in the comments below!